Guide to Submissions and House Style for the


Richard Berkeley, Editor
(Version VI, 14 January 2019)
Purpose of the Journal
The Journal of Romanticism is a peer-reviewed, paper-based journal that approaches the study of Romanticism in a broad and interdisciplinary way.  It looks to develop the field of study by eschewing the traditional divisions that have limited scholarship in the field.  It seeks to incorporate analysis of the whole range of artistic, cultural, and intellectual manifestations of Romanticism.  Likewise, it seeks to transcend narrow historical conceptions that have bound the very idea of Romanticism to rigid localities, artificially narrow date-ranges, and in some cases to a handful of particular personalities.  Thus art history, literature, musicology, philosophy, politics, scientific history and many other approaches to human culture will be invited to interact in a way that often receives lip service, but is seldom directly pursued.  Accordingly, a thoughtful and fresh take on methodology will be a feature of the Journal’s direction.

Contributors
All contributors will receive a complimentary subscription to the Journal of Romanticism for the calendar year, and are eligible for the RA Prizes.

It should be double-spaced and formatted in a reasonable type-face (eg Times New Roman 12pt, or Garamond 12pt), with page numbers and your name prominently displayed.  If I do not already know you, then I would appreciate some kind of brief bio in your covering email, just by way of introduction.

You do not otherwise need to go to the trouble of changing to our house-style at the submission stage.  If your submission is accepted, then we will expect you to change over to British spelling, English spacing, and so forth, as may be necessary.

However, please do observe the use of footnotes rather than endnotes or inline citations from the start, because that can affect the whole writing style.

Footnoting & Bibliography
The journal uses a full footnoting style rather than endnotes or inline citations.  Additionally, we use a full bibliography, normally even for book reviews.  We do stress that this means that a full citation is required in footnotes.  Inline citations should only be used for works that are cited repeatedly, and sparingly even then.

This is quite deliberate, and we are fully aware that it is fashionable to eliminate footnotes and endnotes altogether, and for some publishers to place a premium on space.

The purpose of academic references is to enable the reader to understand readily where a quotation has come from, and to follow up on it easily.  This purpose is defeated by hiding the information in endnotes.  It is even more deeply defeated by sentences such as:
It is difficult for the general reader to realise that it was me (not Bishop Berkeley) who called McFarland’s interpretation of Spinoza and the pantheism controversy “idiosyncratic”, and it is also difficult for anyone to guess which of McFarland’s dozen or so books I was commenting on.  In fact, it is even difficult for a non-specialist to see that Spinoza, Hume, Novalis, McFarland, and myself were all writing in different centuries and in different countries.  The only way the reader can end the confusion is to make a long and tiresome trek to the bibliography.  We hope to save them this trouble.

Word  Limit
The word limit is 9000 words for an article and 2000 words for a book review, including footnotes and bibliography.  This is deliberately challenging, because a great deal of academic writing is damaged by being too verbose.  The extra words almost always detract from the unity of the argument.  And if it is getting that long, perhaps you should consider breaking it into two articles.

Grammar and Usage
The purpose of academic writing is to communicate, rather than to be pedantic.  But try not to break too many rules.

A good guide to usage is any recent edition of Fowler’s Modern English Usage (Oxford UP), which covers thousands of points such as the difference between “inquiry” and “enquiry” or between “affect” and “effect”.  It is particularly helpful in pointing out some of the differences in usage between British and American English.

Languages
The language of the journal is British English.  Quotations in the original languages are encouraged where possible.  You can also supply a translation in a footnote if you think it will be helpful for the reader.

Spacing
The journal uses English spacing as opposed to French spacing.  This means that there are two spaces after each full stop.  This is a traditional means to emphasise the visual unity of each sentence.

Internet Citations
These should be used sparingly as they are sometimes unhelpful to the reader.  We may not even be using the same system for internet addresses in 20 years, and most pinpoint internet citations will not work even after a few years.  Therefore, if it is necessary to refer to an internet source, then it is better to refer to the general website or internet resource or a permalink, where possible.

Citation Style
The citation style is not intended to be unusual or arcane, and is identical for footnotes and the bibliography (except that the name is given in the normal order in the footnotes, instead of surname first).

Some points to watch:
--the author’s name is followed by a comma, not a full-stop, so that each citation is a sentence.
--the page ranges of book-chapters or articles are given after a colon, and if there is a pinpoint reference within that range, then you can indicate this with “at” or simply with a comma.
--judicious extra information such as the title of a volume in a multi-volume series can be added as long as it is not too bulky (see the Coleridge examples below).
--use “vol”, “part”, etc. but not “p”.
--use “UP” for “University Press”.
--titles with no authors should be listed by title, excluding any article.
--Names beginning with “Mac or Mc” are treated as if spelled “Mac” and listed before other “M” names.

But examples are the easiest way to demonstrate the conventions.  It is always useful to look at our back issues, not just for style, but for a sense of the intellectual direction and atmosphere of the journal.

Here are some further specific illustrations: 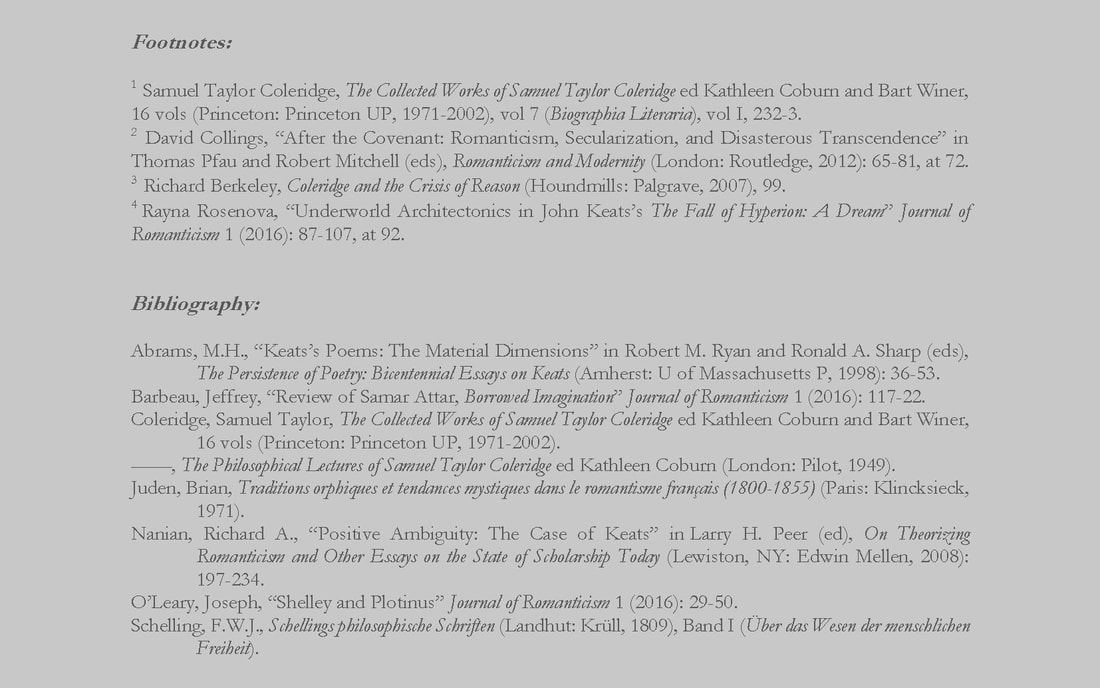